One of the first books I read in the new year was Atomic Habits by James Clear. If you have not read it yet I suggest you do. I recommend it for anyone wanting to set new goals for the new year but not get derailed as they have in the past time and time again. Or those that love to stay on a routine even through the crazy times of the pandemic. It changed my outlook on goal setting and routines and turned it into systems and habits.

System – a process that led to results.

Habit – a behavior that has been repeated enough times to become automatic. 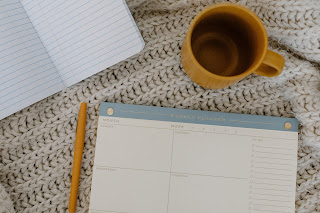 Our habits can be broken down into a feedback loop that involves four steps: cue, craving, response, and reward. Clear then goes on to explain a simple set of rules that we can use to build better habits called the Four Laws of Behavior Change. You will have to read the book yourself to learn more. I promise you won’t regret it.

With all the being said after finishing the book I used these two sets of rules to make daily habits or a “daily routine”. I’m going to share them with you today. Let’s start with the morning habits:

These are a lot of habits to keep track of during any given day. That is why I use a bullet journal every morning and night. I have a page titled “Habit Tracker”. I keep track of everything on a daily basis in my bullet journal. Not only has it been helpful but so has Atomic Habits. It has not only helped me create meaningful habits but has also taught me that not everyone is perfect. It is important to know that you are going to have an off day what you do during that off day is what is most important. Keep your system because it is your identity. You’ll have to read the book to learn more about that too!

Later babes, I hope you read Atomic Habits and come up with your own system and habits!